A tiny, flexible, traditional (not old school) roleplaying game that was composed primarily on my phone, not always while sober.

Basically, the more important something is to your character, the more dice you get to slam down.

The intention here was to keep things low math - the result being there are no numbers on your character sheet, and nothing more complex than comparing greater than/less than.

The expansion playsets include lists of suggested tags, but you should make up your own and use the ones you will most enjoy playing.

You'll want some dice, pen & paper, and maybe some sort of tokens to mark tags with. I mean, in addition to other players.

The luxury mimeograph edition can be folded into thirds and kept it in your pencil box because all the cool kids have pencil boxes.

Oh, here's the  entire text of the luxury mimeograph edition:

Scrawl notes. Tell stories. Roll another die for each significant and relevant thing.

Gather: You’ll need some regular six-sided dice, a few scraps of paper or maybe a stack of sticky-notes, something to write with, and at least a couple of players.

Establish: Collectively decide what sort of stories you want to create, and the setting to frame them. Think about the genre and tone and any themes you might want to address, how the characters are connected to each other, and what sorts of challenges they will face – as well as situations you won’t want to deal with.

Maybe you’ll use a premade playset, or a setting inspired by a book or movie you dig.

Form: Decide on a name and probably not more than five tags for your character, and write them down. Tags may be any concept, ability, or trait that’s important for the PC you want play. Explain their significance.

Playsets might suggest appropriate tags that help establish your place in the world and your group, why you do what you do, how you might be described, something that makes a character distinct, and probably a personal challenge.

Don’t get too hung up on the tags as listed in the playsets; rename and modify them, explain how you got them, and create new ones to make the character you and the other players want.

Narrate: The GM presents the world and its denizens, situations, and conflicts. The players decide how their PCs interact with all of that, and the GM tells how the world reacts to them.

Determine: When an action’s outcome isn’t obvious, roll a red and a white die. If the high die is red, the action succeeds.

Escalate: Before rolling, add a red die for each tag which supports the intent and white dice for those that oppose it. These tags may be provided by just about anything narratively relevant and significant, including the acting character, someone opposing them, or the environment itself.

Neutralize: If the highest red and white dice are tied, remove both and use the next highest of each to determine the result. Repeat as necessary.

Risk: Your success can take your opponent out of a conflict just as their success can do it to you. Being taken out doesn’t just mean unconsciousness or death: capture, public shaming, or financial loss are just a few possibilities. Sometimes the victor determines what happens to their victim. Maybe you just let someone walk away after their defeat?

Persist: Mark a relevant tag to remain in a conflict. A tag may not have more than one mark at a time - they still work normally, but can’t carry additional stress.

Between scenes, clear one mark. Clearing marks doesn’t prevent you from referring to injuries or other afflictions you’ve earned.

Proceed: Every player gets a chance to do something before anyone else acts again. That opportunity may be used to wait and see what someone else does. If the priority order isn’t clear based on the situation, roll some dice to figure it out.

Prepare: A successful action may add or remove a condition. Conditions act as temporary tags, normally until the end of a scene.

Upset: If a die color runs out due to ties, that color determines the result. If both run out at the same time, the most narrowly specific tag involved is what guides the outcome.

Recuperate: Clear all marks by spending time being tended to in a safe situation. This probably means at least a night’s sleep and engaging in a favorite activity, but may mean medical or psychological attention, or other personal maintenance.

Experience: After a session, write a simple sentence describing a significant incident from that story. You may then mark that experience once per session to recall it as a momentary tag in support of something related to. Clear that mark after the session.

The experience doesn’t need to have happened overtly during the game, and may have been implied or otherwise “off-screen.”

Develop: Get a new tag by committing relevant experiences to it. Strike a number of experiences equal to how many tags you will then have – those experiences may no longer be recalled for temporary support.

Amend: Regardless of an action’s outcome, if the highest supporting die is part of a pair (or other set), get a situational benefit or edge of some sort. If the highest opposed die is part of a set, there’s a snag or glitch. These can create or remove a condition. If you want more significant outcomes based on larger sets, I’m staying out of it – it’s your game.

Describe: Explaining an action colorfully adds a supporting die. Using the same description again gets an opposing die for being predictable.

Distribute: Rather than rolling two different colors of dice, have someone else roll for the opposition.

Cherrypick: If a suggested rule doesn’t play nicely with others, disregard it in favor of the ones you like.

Find out what the PCs (and their players) want, and why it’s important – then give them the opportunity to demonstrate how far they'll go to get it. Present antagonists and obstacles to test their tags – that’s why they picked ‘em.

Ask questions about the PCs’ tags. Why are they meaningful, especially their motivations? Players should note why they matter.

Some tags are quite broad - have the players be more specific. Help to clarify and rework tag names so they’re more easily understood and agreed upon.

Not having a tag means you don’t get another die to roll, but doesn’t necessarily mean you can’t access something. You can still swing the sword, you just don’t get a support die.

NPCs tend to have a number of tags proportional to their narrative significance. A proud shopkeeper has the tags “Proud” and “Shopkeeper,” and it’s unlikely even those will get a workout. A more significant character, such as a major antagonist, might have more tags than the PCs do, and a thug might just have “thug.”

It may be a good idea for each PC to have at least one tag of each type suggested by a playset, but it’s your game and characters.

If your writing is sloppy enough, you don't need to separate yourself from the players with a GM screen. Heck, let ‘em see your notes, then play up dramatic irony.

Relevant and significant are pretty subjective ideas that should be generally agreed upon by the players. Is a tag important to the story events logically, thematically, or narratively? Talk these things out, but don’t spend too much time negotiating. If a player thought a tag would be great for just such an occasion, maybe be cool about it and let it happen, and spend time between sessions hashing out expectations.

Doing something in agreement with a personality or motivating tag is relevant and significant. 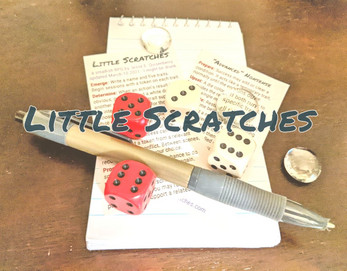